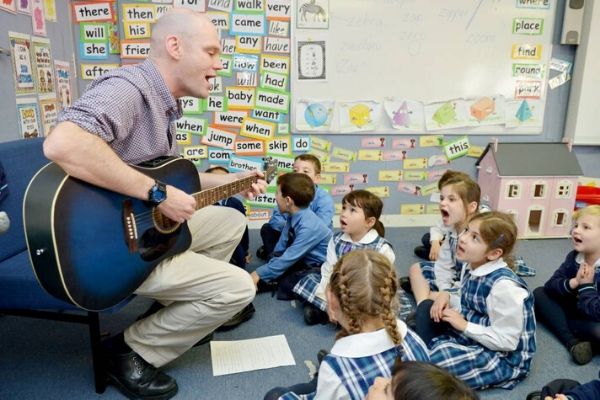 A teacher from Kogarah has become a global phenomenon in the digital sphere of music education.

Dan Colquhoun’s YouTube channel has reached 3.2 million hits with his songs that he plays for classrooms all over the world.

Mr Colquhoun creates catchy, rock-and-roll music-based lessons with his guitar, and writes songs on what pupils learn in class, to help them succeed in literacy and numeracy.

He connects with classrooms via video link-up, and says his aim is to inspire children to embrace learning through sound.

“I struggled at school because I’m dyslexic, which meant I had trouble with difficulties with reading and writing,” he said.

“[Because] I struggled to learn in a conventional way, I tried to find a way to help all children learn concepts they might have difficulty understanding.

“Music and movement have a really positive impact on children’s learning.

“It adds another dimension rather than someone talking in a classroom, and it’s easier for children to remember something if its put to music.”

He was named in the top 25 children’s music blogs and websites to follow in 2018.

His biggest audience in the US.

Mr Colquhoun says it is wonderful to have his musical educational work recognised.

“It’s incredible to think that my music and animations have been seen in so many different classrooms by so many children from around the world,” he said.

“It gives me great joy to know that I have reached so many teachers and children from around world with my educational music and as a result helped so many kids with their learning.